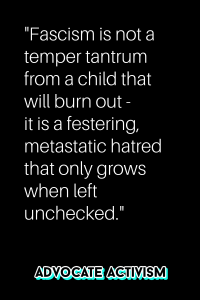 On Sunday, August 22nd, 2021, Amira and I stood on the waterfront of downtown Portland in a sea of black-clad antifascists alongside a crew of interfaith leaders – the Portland Interfaith Clergy Resistance (aka PICR). We got there around 11:45 to pray/hold space and decide on our plans. Right wing extremists, including Proud Boys, had planned a rally on the one year anniversary of an intense street battle where bear mace and injuries were plentiful. The battle was between fascists – Proud Boys, Patriot Prayer, III%ers – and anti-fascists. Portland has a LONG history of white supremacy and fascism being countered by antifascist action. (This is an excellent podcast about PDX specifically)

Throughout the years it has been very clear – leave the right alone to hold their rallies and gather, and they WILL find people to harass or commit violence against. Most often when they hold a rally and aren’t given enough pushback, they will roam the streets on foot or in trucks and bear mace or shoot paintballs at random people, hunt down and harass people that are dressed in black (thus ‘antifa’) or visibly marginalized (queer, trans, disabled, race minority, or houseless), or they will fuck with houseless camps by knifing tents, setting fires, or destroying their belongings. We have seen this pattern repeatedly. Showing up to face off with them is unfortunately necessary. Fascism is not a temper tantrum from a child that will burn out, it is a festering, metastatic hatred that only grows when left unchecked. This isnt just Portland history – it’s *world* history.

The citizens of Portland spread the word and rallied in a big way, prompting the fascist rally to change their planned location from the waterfront, to a secret location that would be announced just hours before their event. It turned out to be an abandoned Kmart parking lot in one of Portland’s most diverse neighborhoods – Parkrose. Experienced antifascists decided to stay the course and meet at Salmon Springs fountain on the waterfront as planned. There were many reasons for this and I wont pretend to know them all, I’m just a baby antifascist in the grand scheme of things and not experienced in organizing counter protests. A couple of the reasons I heard from many folks – it could absolutely be a lie to divide our response and spread our numbers thin or they may meet there and then caravan out later. Proud Boy types love caravaning places in their trucks. We also didnt want to move the bulk of the confrontation *into* a neighborhood when there was a good chance we could still drawn them and their violence out to the waterfront. This would vastly lessen the negative impact on the Parkrose community. There was also the problem of mobilizing nearly 500 people to drive 10 miles away to the other location. Coordinating that would have been an immense challenge. 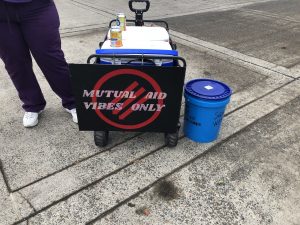 As I stood with my PICR comrades in the signature purple vests, we chatted with the folks in the crowd – my estimate is around 500 at the peak. I brought my mutual aid cart with coolers of water and sparkling water, as well as a bucket filled with homemadeSudecon wipes* to distribute to whoever needed them. Many folks we spoke with expressed appreciation for our attendance – not many clergy or faith leaders will openly support and stand with black bloc antifascists. Believe it or not, many people in the community also have significant trauma from their faith communities so for some of them, seeing us there in solidarity with them is healing.  Soon there was a few tables stacked with pizzas that were being distributed to everyone for free. Other carts and coolers made the rounds, making sure everyone stayed hydrated as we stood watch, waiting to see what would happen with the far-right rally. One thing that I wanted to note is how often people would leave additional supplies with us to distribute – a handful or two of Sudecon wipes for the bucket, a bag or two of snacks. Many folks not only brought supplies for themselves, but wanted to make sure their comrades were provided for as well. Supplies were freely given, without expectation. “We keep us safe” is a motto that the community takes seriously.

Eventually some smaller groups of antifascists decided to head out to the Kmart lot and face off with the Proud Boys. This caused a decent amount of confusion and since I am not experiences and my role as clergy witness was to stand with the people (not make decisions for them) I dont really think publicly judging people’s decisions is my place. Those of us in purple vests discussed what we should do repeatedly, but since the overwhelming majority were staying, it seemed like the right call to stay.

A call of “shots fired at kmart” started a bit of a panic, before calmer heads dug in for details from comrades at the scene. Im not sure who started that idea. I quickly checked my phone to see what I could find out from those who were over at the other location and all I could find was that paintballs, pepperballs, bear mace, and fireworks had been deployed. No one was reporting live ammo. Soon enough it had become clear that whoever had shouted that out, had been incorrect. That is one reason it is important to stay calm and verify information before taking action.

During one of the more contentious moments, a Black antifascist yelled that we should be in Parkrose or we “dont care about Black people.” Now, I wish I could say that antifascists are all committed anti-racists but they are not – racism, misogyny, and ableism are all present in the community, but I sincerely do not believe that was the reason most folks stayed. For one, there were plenty of Black people both in bloc and out, who were committed to staying at the waterfront. Saying none of them cared about Black people seems incorrect. I do think that the vast majority of people who stayed, stayed because they truly thought that was the best tactical decision. There were intense discussions among the groups debating what the plan should be and all the ins and out of each option.

As these discussions were taking place, reports and videos started to come in about a disability van having its windows smashed out and being flipped by the right-wing rally and someone being attacked pretty brutally in their car. Then there was a call for a limited number to head over and assist with extraction and evacuation – antifascists were outnumbered and being hurt.  As this violence escalated, the right wing rally also wrapped up and was mobilizing. Antifascists at the waterfront started to prepare the area for a caravan of chuds* to roll in while we watched their video feeds to find out where they decided to go. It seemed some were headed downtown to us, so many of us gathered at the towards the front and started gearing up – respirators, goggles, helmets, etc. and barricades were built from nearby construction site materials.

A few minutes later there were shots fired a few blocks away, but still downtown, not in Parkrose. To the best of my knowledge through witness reports, a man followed and harassed a pair of Black kids – heckling them and trying to show them photos of Black people being lynched on his phone. Soon he was confronted and he pulled out a gun. He shot into a crowd at least once before his gun jammed. Someone in the crowd fired back but no people were hit or injured. The shooter was quickly arrested by Portland Police, including by an undercover cop that was clearly dressed in black bloc and had been at the waterfront. I wish I could say he stayed in jail but he was only charged with unlawful possession and unlawful use of a firearm and released  later that night – with no bail and no court date. Another indicator that we dont have a *justice* system, we have a legal system. (Thanks to Go Home Bible, You’re Drunk for that succinct quote!)

Around 6:30pm the group I was with decided to call it a night. Our physical limitations and the limits on our families were pretty much maxed out. When we left there was still a significant amount of people, though the likelihood of a big group of fascists had seemed to diminish. Had there still been a significant chance of them showing, I think we probably would have stayed longer.

All in all, the day was MUCH less violent than the previous year, and many hailed it as a success. Others were understandably frustrated that more people didnt mobilize to go to the other location and confront them head-on. In the days after, Ive read a lot of critiques and many of them were valid. Some made assumptions about the motivations of others that didnt seem fair. There is a lot I am not really mentioning here, for no other reason than it would be incredibly lengthy and I dont think I can focus long enough. Here is one article that seemed to do a good job of encompassing what I had observed (bonus – pretty good picture in the header). All-in-all, I was really glad to have been able to show up and support the work – and I will keep on doing it as much as I am able for as long as fascists continue to gather and recruit in our communities.

In love and solidarity,

Chud – a pejorative term for right wing folks that is generally used by leftist activists.

Black Bloc – all black clothing with labels removed and covering identifying features like tattoos and piercings. The main point of this is to anonymize individuals to avoid right-wing doxing and persecution from police.